Pollination and seed dispersal of many plant species are intricately linked to their faunal partners. The correct management and conservation of the fauna in the conservancy is crucial to the future functioning of the conservancy ecosystems. However, most animals found within the Conservancy are shy and difficult to see, with a large portion if these animals being nocturnal. In 2015 the WBFC acquired eight camera traps (funded by Grootbos Nature Reserve) which are placed at various strategic sites across the conservancy. Along with these 8 camera traps, landowners within the conservancy also have privately bought cameras which help with getting to know the movement of the animals in the area.

Since then, The Grootbos Foundation acquired funding for an additional 30 camera traps, and together with privately owned cameras 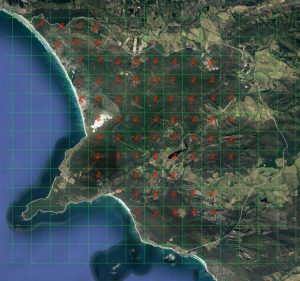 In 2019, we launched a grid based camera trap survey,with grids of 5 square km. Each grid contains a single camera station in its centre point. Data is gathered on wildlife that pass by these cameras over time. Which will allow us to make informed conservation decisions when planning corridor networks and protected environments.

Invasive alien flora, the Australian Acacias in particular, pose the greatest threat to conservation in the Walker Bay Region. During the 1950s and 60s, Acacia cyclops was planted on the dunes along the Walker Bay coastline for the purpose of stabilisation. These trees covered the dunes rapidly and subsequently invaded the inland dune Fynbos. The Acacias are most common in sandy coastal soils where they can form dense stands that eliminate the indigenous flora. Much of the natural vegetation in the conservancy is threatened by invasion from exotic trees. Other species such as Eucalyptus, Pines and Hakea have also been recorded on the surrounding sandstone hills. In partnership with Agulhas Biodiversity Initiative (ABI) and the Flower Valley Conservation Trust, the Conservancy has spent approximately R2.7 million on alien clearing over the last 3 years, with approximately 6000 hectares of alien vegetation being cleared. A further application to the Agulhas Biodiversity Initiative has been submitted for the next three years in order for alien clearing to continue in the Walker Bay region.

In 2019, the conservancy received an allocation of R600 000 from DEA for follow up alien clearing. This has provided much needed employment for teams who have received training facilitated by the Grootbos Foundation.

The alien clearing DEA funding project is being run by Flower Valley Conservation Trust, and funds are allocated to properties where landowners have invested in the conservation management of their land.

Over the last 17 years, we have recorded 1012 species of indigenous plants in the conservancy, including 8 which are endemic to the area as well as 6 which are completely new to Science. Our 3-5 year vision is to link the Conservancy with the Agulhas National Park, some 25 kilometres to the south-east by securing and establishing high conservancy priority land to establish a recognised, functional and economically viable corridor. We are in the process of mapping endangered vegetation types focusing on critically endangered Elim Ferricrete fynbos, critically endangered Overberg Sandstone fynbos and Vulnerable Agulhas Limestone fynbos. As part of this vegetation survey, we are setting up permanent vegetation monitoring plots as various sites within the Conservancy. 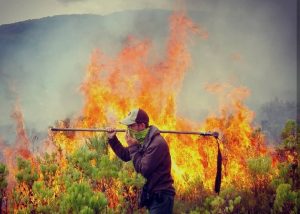 Wild fires are a common occurrences in the WBFC. The large tracts of undisturbed lands and highly flammable fynbos vegetation result in thousands of hectares being burnt virtually on a yearly basis during the dry summer months from November to March. A fire management plan is described under management programmes later on in the website. It is important that wild fire control is explored from a regional perspective and that all role-players and resources are considered. The Conservancy has developed a fire reaction plan, which informs decisions in the event of a wild fire.
The conservancy members are all members of the Greater Overberg Fire Protection Association , and the conservancy forms a fire management unit within GOFPA. We have acquired firefighting equipment, trained staff and our fire reaction team is managed by our conservancy manager.

Various organisations within the Conservancy, focus on developing sustainable nature-based livelihoods and creating opportunities for unemployed youth to enter nature based careers. The Flower Valley Conservation Trust, Grootbos Foundation and Skills Exchange Cooperative have programmes which focus on the upliftment and development within local communities, with a strong environmental component.